The end of the broken arm

May 25, 2020
Just to conclude, Bethany finally had surgery on March 24 (three weeks after the break) and had a plate put in her arm. We had a total of five visits in different places, and we ended up at another hospital with a surgeon we hadn't spoken to previously, but we were actually closer to home. Because of Covid-19, I had to beg to go inside the hospital with my daughter, but they did let me in. I was the only one in the hospital who wasn't a patient! It is now May 25, and her cast is off and she is recovering. Her arm still bothers her, and she isn't using her fingers. We had a visit with a physical therapist and received a few tips. He recommended that we see an occupational therapist. I doubt that her insurance will cover that, but we'll make another trip to her primary care physician and find out. Life goes on!
Post a Comment
Read more

Review of Talking to Strangers 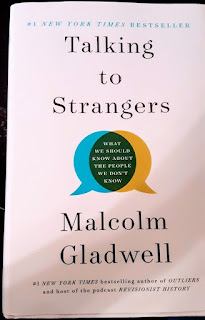 "Sometimes the best conversations between strangers allow the stranger to remain a stranger." Malcolm Gladwell always tells such interesting stories, and the tales in Talking to Strangers are no exception. I had thought the book would a sort of "how to" book for meeting and getting to know new people, but instead it was filled with stories of strangers, behaviors, expectations, and difficulties such as suicide, policing, and intrigue. It begins with the story of a young woman named Sarah Bland. I remember hearing about her with sadness. She had moved from Chicago to Prairie View near Houston. She was stopped by a police officer for a minor traffic violation, things escalated and she was arrested and went to jail. Unable to afford bail, after three days she committed suicide. It was such a hopeless story, and her death was so needless that it haunted many of us. Obviously Malcolm Gladwell felt the same way, and he determined to research and find out what circumst
Post a Comment
Read more

March 09, 2020
So I got in to see the primary care doctor today. Now we have to wait for IEHP to send us a letter giving us permission to see an orthopedic physician! I asked if there was anyway to speed up the process, and it is possible if I call the office in the next two days. Her doctor also said she would need a new blood-work panel and an EKG if they needed to do surgery. The EKG would be next to impossible for our handicapped child, so in all likelihood they would be unable to do surgery. What??? Hopefully she won't need surgery anyway, and this will be a mute point. It was a week ago that she fell and broke her arm, and we haven't yet seen anyone who can do anything to make sure it is healing correctly or to check why her fingers are bruised and swollen. Fifty years ago when the cost was $25 cash for an office visit, the family doctor would have done X-rays, reset the arm if necessary, and put it in a splint or cast. Unless there was a major problem, you were done! Unfortunatel
Post a Comment
Read more

March 05, 2020
My daughter broke her arm this week, and we experienced the wonders of government "healthcare." Because she is handicapped and over 18, her only options for insurance are government paid IEHP or Molina. IEHP is supposed to be a little better, so that is what we use. Our other option would be to pay cash. We did that until she was ten, but the prices would be exorbitant today. After I figured out her arm was sprained or broken, I took her to urgent care, thinking they would be able to do x-rays and put her in a splint or cast. Urgent care apparently is not really for urgent things like broken bones. They did the x-rays and and sent us to Arrowhead Regional Medical Center's ER. When we arrived about 7:00 pm, I was surprised to find the waiting room small and overcrowded. Fortunately we had a wheelchair for Bethany, but Holmes and I stood for about four hours because there were no seats. However, we weren't sure we wanted to sit down because there were so many contag
Post a Comment
Read more 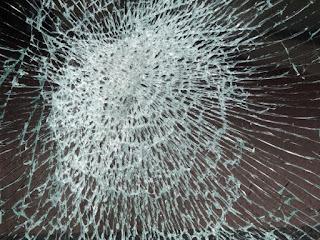 Broken Glass We started off this week with broken glass--a cracked van window due to an unfortunate crash in our usually safe garage and a pyrex dish that shattered into a million pieces! (It seemed like it anyway!) So I started thinking about broken glass and life. Glass is pretty and useful, but it has no give, so it breaks when something crashes into it. After that it is of no use except to be tossed in the trash.  As a human, made in the image of God, I realized that I don't want to be like glass. I want to be molded and changed like God says of the potter and the clay in Jeremiah 18. Sometimes that is painful and involves confessing sin and admitting I am wrong, but those difficult things are what cause me to change in the right direction--toward loving God and my fellow man! Also, the pyrex dish broke because another glass item crashed into it. As humans, we don't want to be glass-like in our relationships. We need to be willing to bend and give so that we don&
Post a Comment
Read more 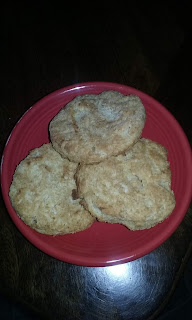 Gluten Free Biscuits! Yummy Gluten-Free Biscuit Recipe I've played around with this recipe, and I think I have it about right! Heat oven to 450º. Ingredients: 2 cups Namaste Perfect Flour Blend--You can buy this at Costco, Clark's (our local health food store), or online directly from Namaste. 1 tsp salt 2 tsp baking powder 1/2 tsp baking soda 2 tsp sugar (optional) 6 T butter ( I like to use Kerrygold butter) 3/4 to 1 cup milk, cream or buttermilk--if batter is too dry, add more, if too runny add a little flour. Instructions: Combine all the dry ingredients. Cut the butter into the flour (I usually end up doing this with my hands because I get so frustrated using knives.) Add the milk or whatever you are using for your liquid. Mix together lightly until combined. At this point you can make drop biscuits by dropping large spoonfuls onto a cookie sheet. If you prefer a more perfect biscuit, roll the dough out about 1/3 to 1/2 inch thick depending on how
1 comment
Read more

January 27, 2019
I just completed The Gospel Comes With a House Key  by Rosaria Butterfield. Her book challenges the Christian to make hospitality a way of life. Demonstrating how her family reaches out to the people who are hard to love, she discusses how God means for Christians to live in the world. Whether it is keeping a pot of beans on the stove or a chicken in the crockpot, we should make our homes open and be available to help our neighbors and church friends. We can accept people without approving of their behavior--loving them like Jesus did. He was known as the friend of sinners. I would recommend her book as an eye-opening and thought-provoking book that provides ways to be a good neighbor.
Post a Comment
Read more
More posts

vi mom
God is good and He gives us so many blessings! We can rejoice in His goodness. He loves us and sent His son to pay the price for our sin and rebellion. When we repent and believe in His son Jesus, we receive forgiveness and a new life. We can look forward to eternal life--ultimately in heaven with Him! God gives us talents and abilities, and there is no greater satisfaction than using them in creative ways to bring glory to Him.